BANNED  FROM  THE  INTERNET

Well, it's finally happened. After two successful years, and gaining 95,000 subscribers and over 65,000,000 views (71,000,000 views on Social Blade analytics), Google has finally decided to terminate my Youtube channel NBT Zone, which was the premiere content provider for exposing Islam. Did I violate their policies? No. Did I upload threatening, abusive, hateful or disturbing footage? No. See for yourself how the technocrats managed to bend the rules to erase me from the internet. 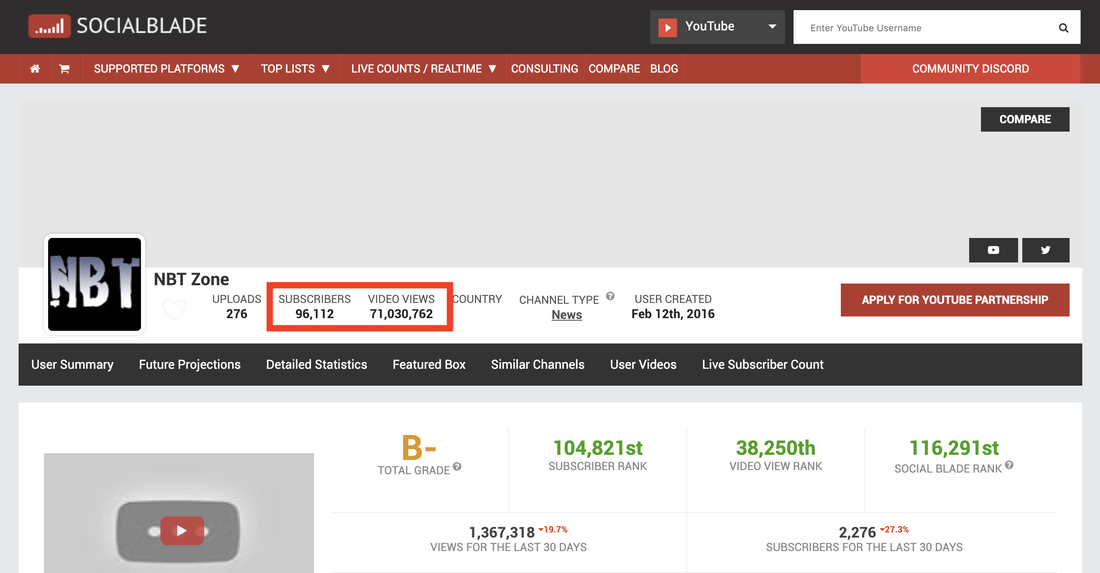 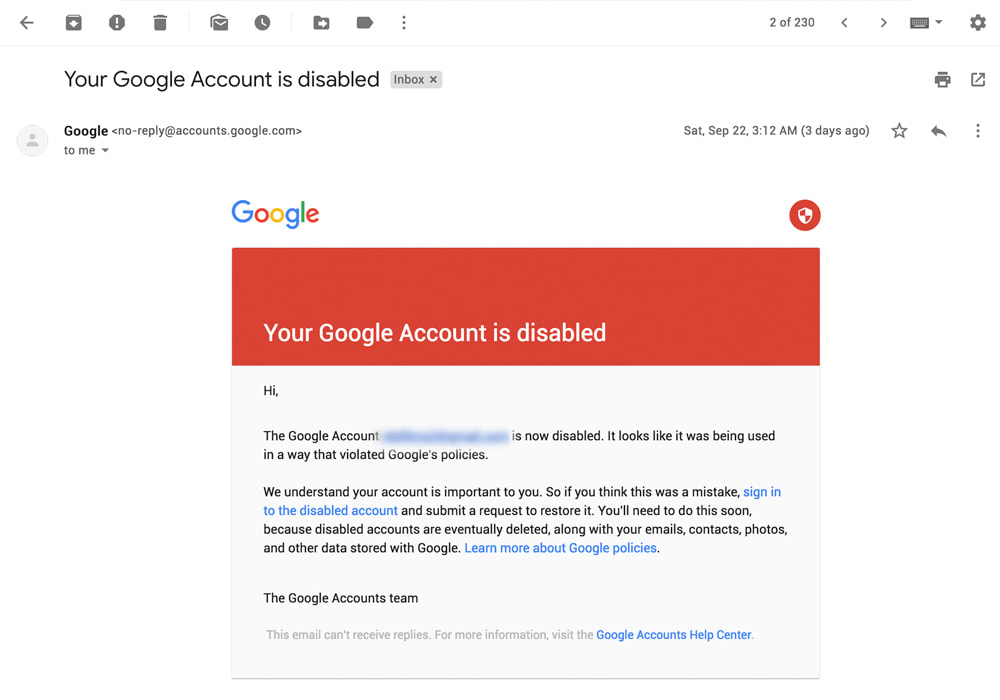 Here is proof that shows how many people my channel has reached. Google hasn't banned me because of 'hate speech', but because I'm popular and refuse to go along with their globalist agenda. 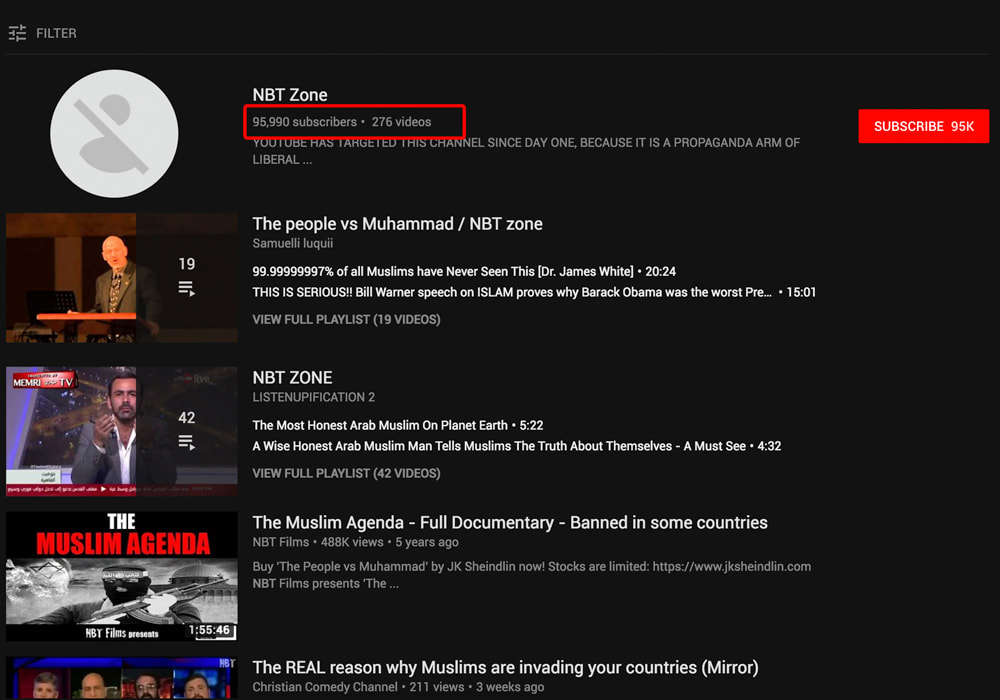 After the 'adpocalypse' fiasco, and when conservatives were losing millions of views and monetization, my channel was still engaging over 1.5 - 2 million people a month.
Please note that these statistics were in 2017. At the time of termination, the channel reached over 65 million viewers. 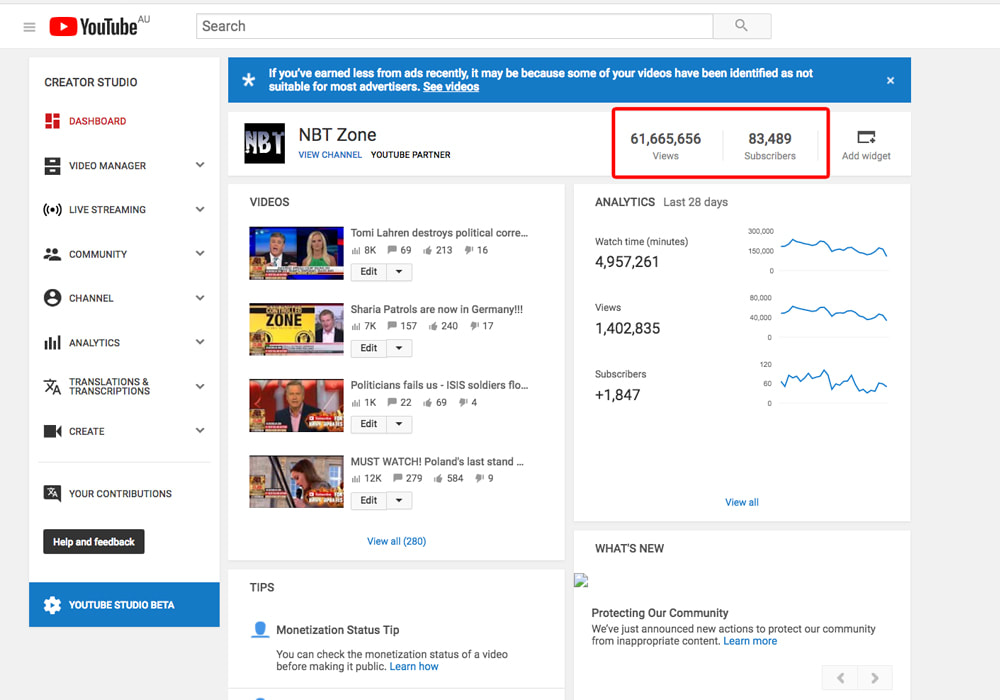 Here is the proof that Google violated their own rules and never issued any warning or community guideline strikes for my content. The attack came quick, calculated and ruthless. If you read the email list, you can see the level of censorship and draconian measures taken by Google to prevent my content from being watched.

Note how the email says that "Due to repeated or severe violations", despite the fact that I never received a community strike. They were desperate to terminate my channel. 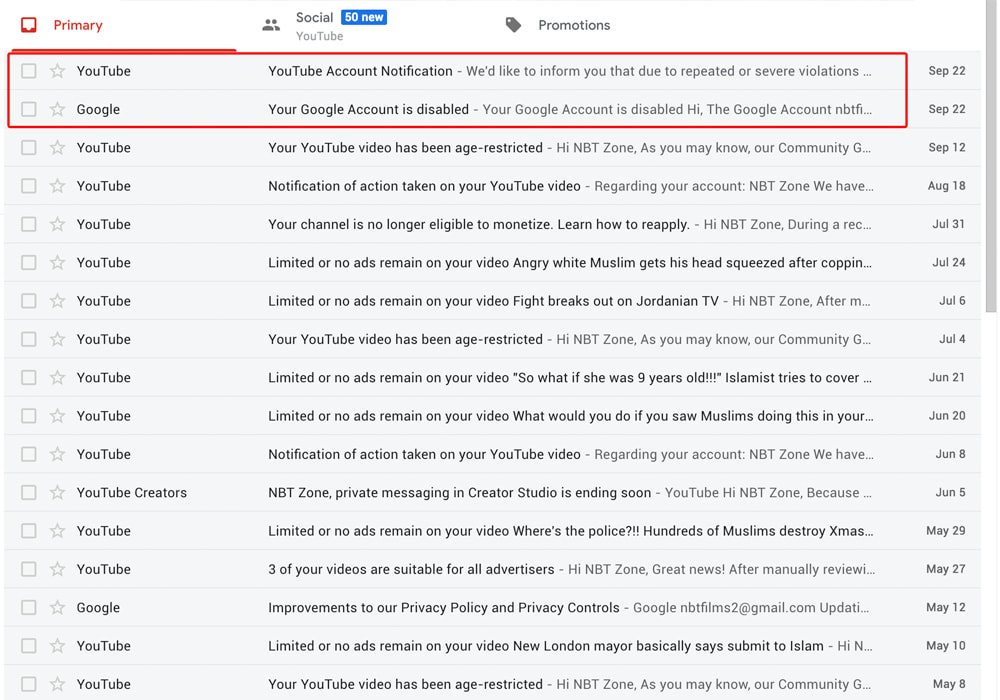 So, how did Google manage to snake their way around the rules they created? They banned me because my channel allegedly had 'commercially deceptive content'. However, they didn't plan on myself taking screenshots of my channel over a year ago in the event that this would happen. I had already diluted my channel down to conform to their politically-correct sensitivities, but it still wasn't enough. See for yourself. 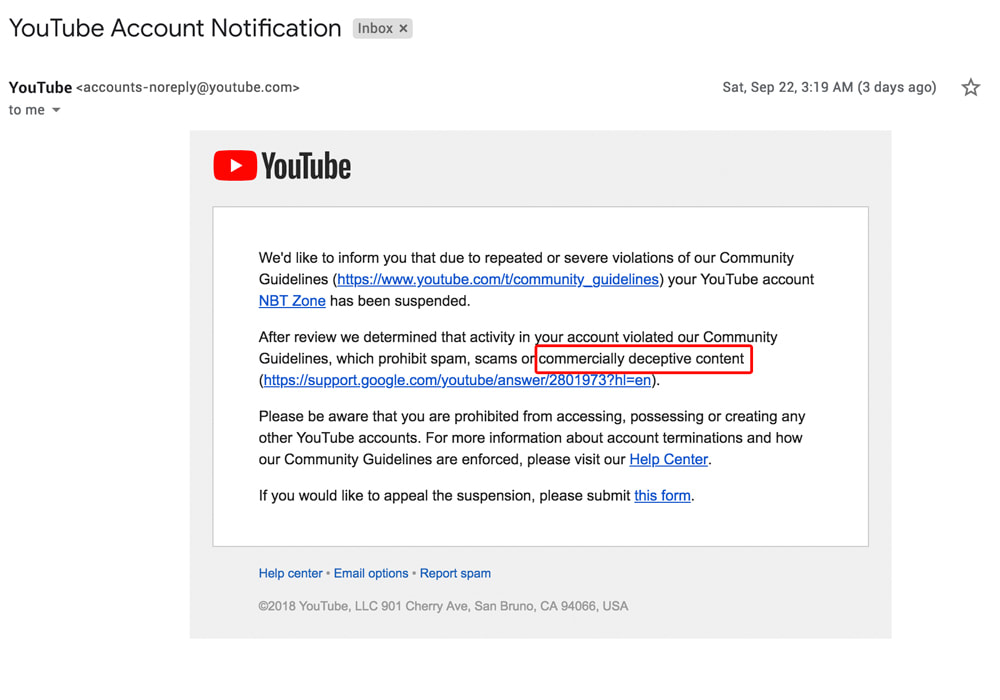 My channel was terminated for allegedly uploading "Spam, scams or commercially deceptive content"... whatever that means.

But Youtube had no problem with my content for 2 years, despite making millions of dollars from my videos in advertising.

And here's the proof that my content contained nothing of the alleged. But we all know that the content wasn't the issue for Google. The fact is that the content was highly popular despite every attempt the technocrats made to ban my books. And that's what scares globalists. Popularity.

As you can see, every video published was unique, truthful and within their community guidelines. If the channel was wholly deceptive, why did Google keep the channel up for 2 years? Google's takedown was clearly a stitch-up. 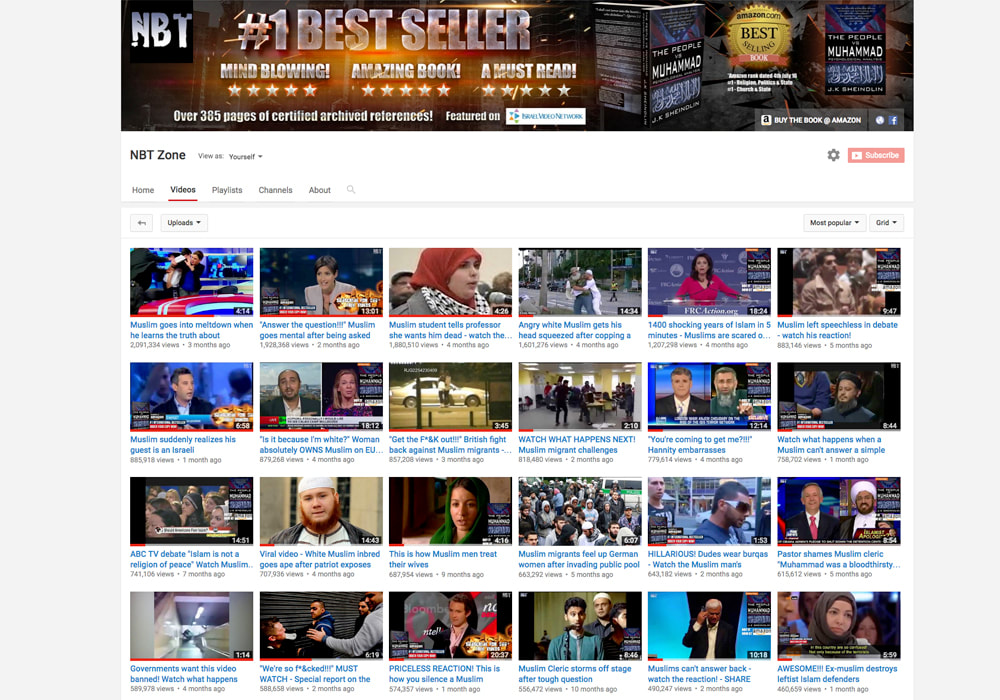 But, I gave Google the benefit of the doubt, under advisement of my lawyers. After all, it wouldn't be the first time some outsourced worker from a third-world country, with no cultural training in western ideals or the 1st amendment, while working for $3 an hour, has banned an entire channel because someone made a remark about their pedophile prophet. Here is my official letter to Google, penned by my lawyers. 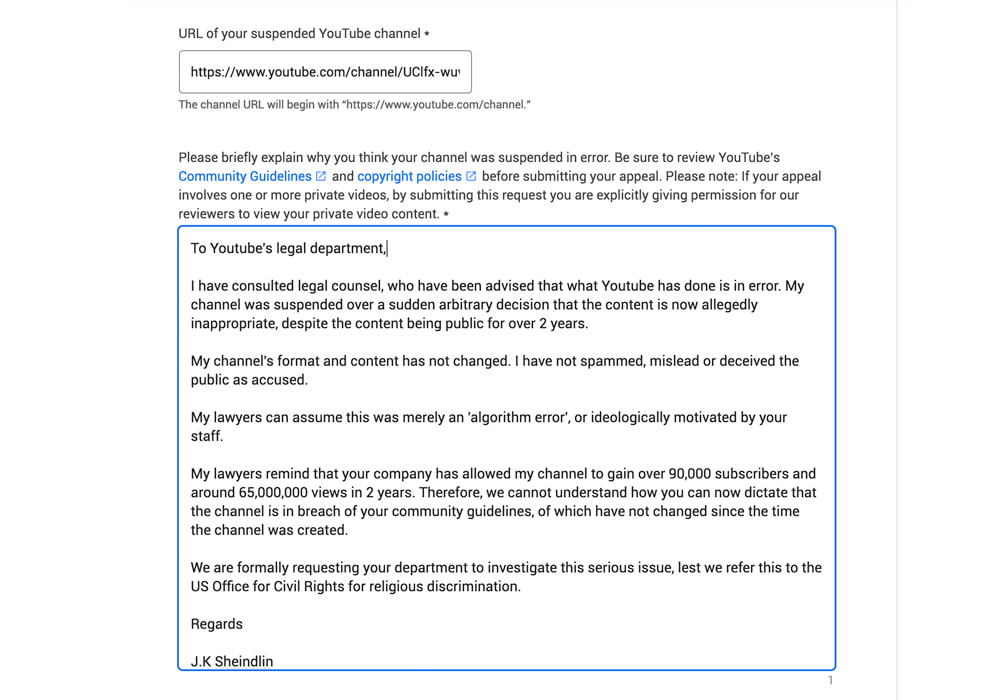 And this was Google's official response. Basically, there are no rules. Their guidelines are arbitrary at best, and nobody is safe. According to their policies, regardless of community guidelines, they can just terminate you without reason. This is the world we live in today, where certain people are above the law and are using technology to deify themselves. 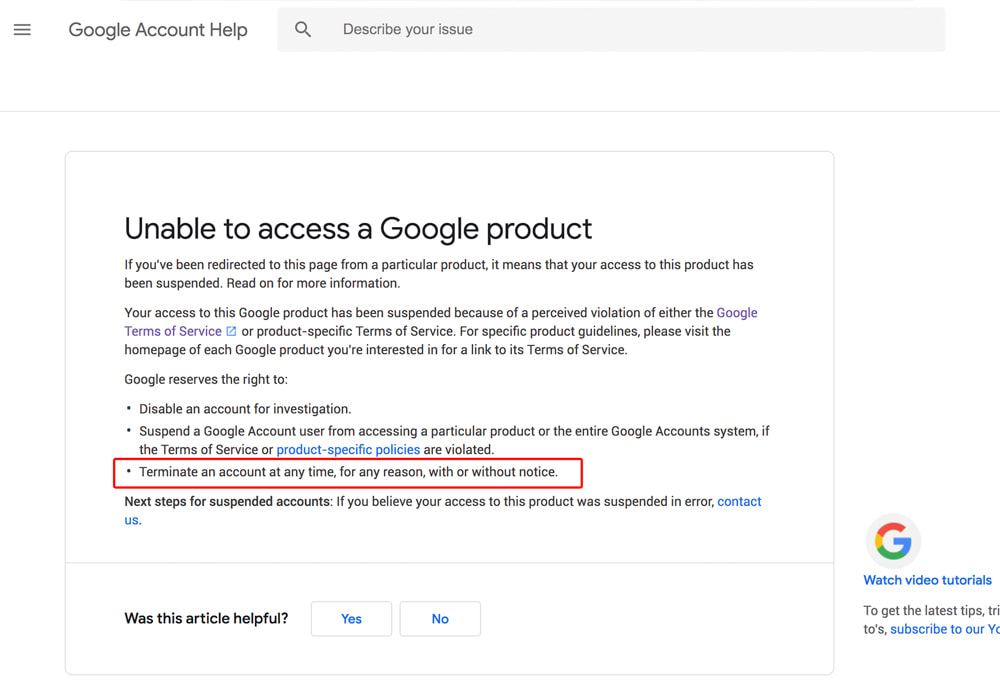 But wait, there's more! As if Google's draconian tactics weren't bad enough, the left-wing leaning forum utility Disqus has also targeted myself for about 2 years. Luckily for me, I kept a record of their blatant censorship which came in the guise of 'algorithm errors'.
​
As you can see, numerous comments of mine have been deleted immediately and flagged as spam despite each message being completely unique and relevant to the topic at hand. It seems that the technocrats do not appreciate people speaking the truth, and are using A.I to curb the narrative to suit their agenda. Here's the proof, but you can also check my account on Disqus if you don't believe me. 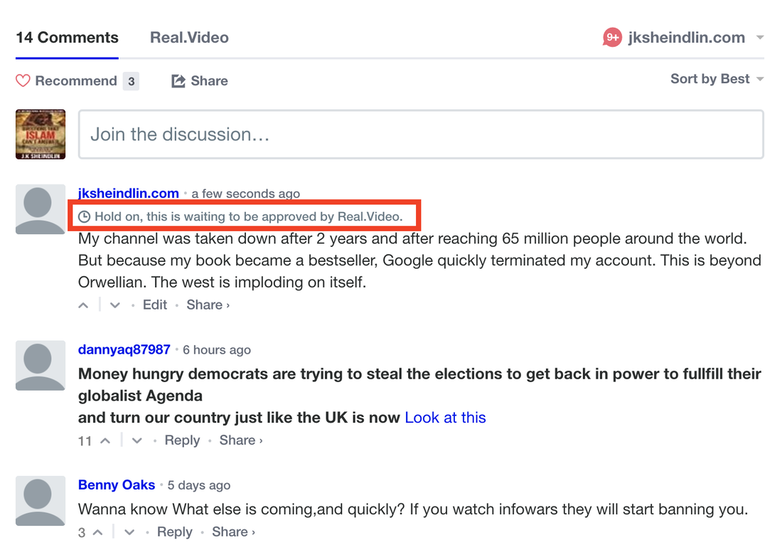 WHEN  DID  THE  CENSORSHIP BEGIN?

Right about the time this man came on the scene... 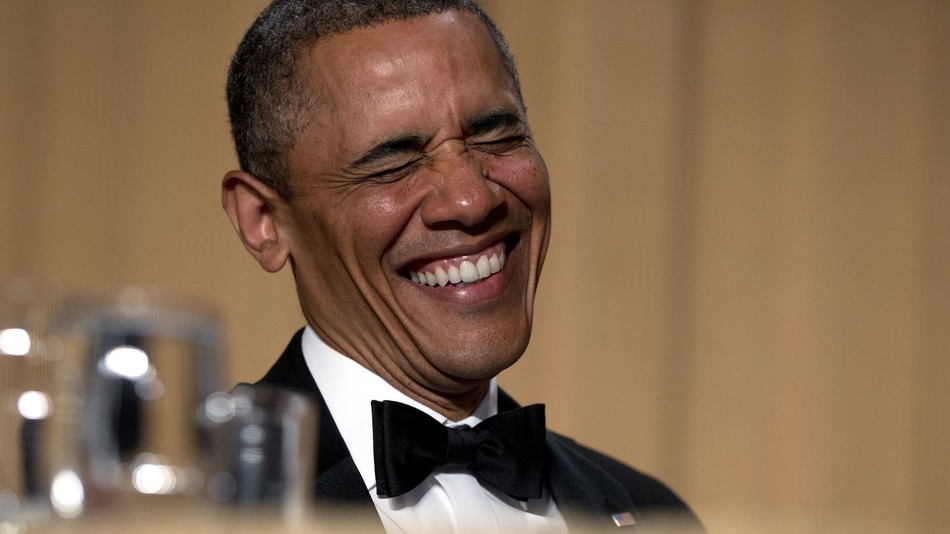 What many don't know is that this closet Muslim, who is actually a fake American (which explains why he doesn't understand the 1st amendment or American culture), signed an accord with the Big tech elites to clamp down on free speech and open internet. Don't believe me? Think this is a giant conspiracy theory? Then look below. As they say, a picture is worth a thousand words. 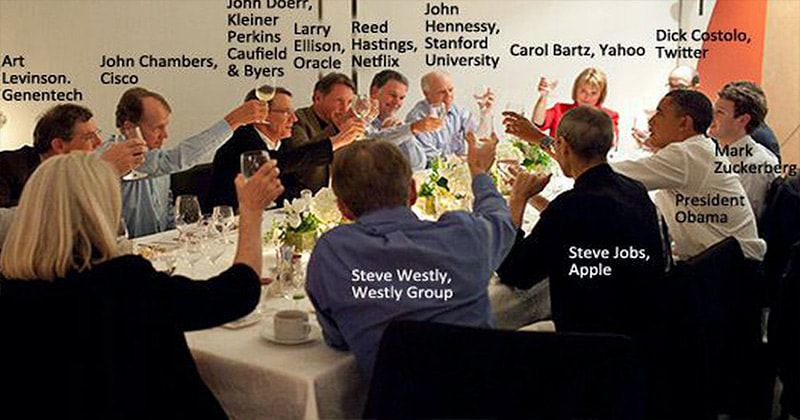 Perhaps the most audacious move in his puppeteer presidency, was to sign away U.S regulation to ICANN, the global organization who controls and monitors your internet domain names. For the layman, ICANN now operates above any law, and is accountable to no regulatory body. When Big tech implements machine learning A.I to be used with ICANN, the internet is doomed.
THEY WILL SHUT YOU DOWN FOREVER.

My name is J.K Sheindlin. I am now officially persona-non-grata on the internet. I have received death threats all because I told the truth. I am relying on you to share this news with everyone you know. If we don't do anything about this now, tomorrow will not be ours.

"The future does not belong to those who slander the prophet of Islam."
- President Obama,
United Nations Assembly 2012

Google evades prosecution for discrimination by claiming it's a private company. But it is a public utility, much like your telephone, water and gas company. Technically, they have no right to censor anyone regardless if they're private, but the legal battle is capricious and would be arduous. However, there is hope in the U.S law to stop their nefarious activities.
​
The internet should be open, and not vetted based on your race, religion, nationality and political persuasion.
​
For more information on the coming global purge of free thinkers, order your copy of Censored - Exposing the New World Order's Agenda to Control Mankind through Hate Speech Laws and Revived Nazism, which explains in detail how the elites will begin a mass persecution complex to eradicate all freedoms by abolishing the constitution. Be warned!